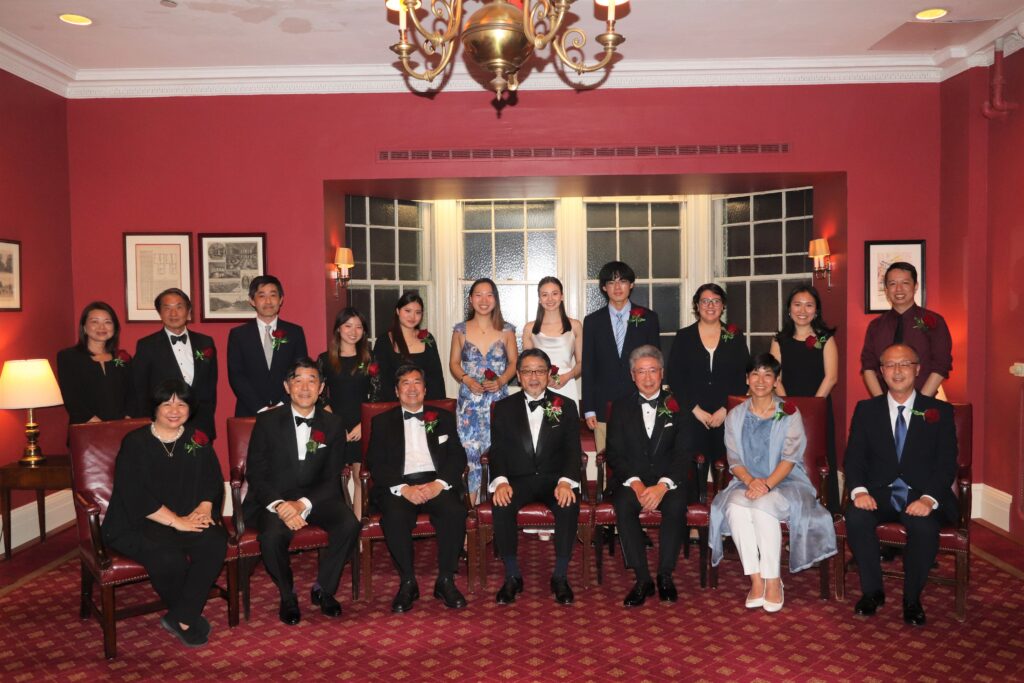 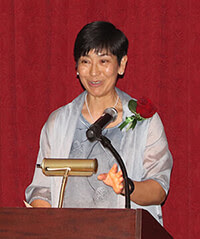 Key note speaker, Dr. Haruko Wakabayashi of Rutgers University, spoke of the first Japanese samurai who arrived in the U.S. in the late 1800s. She encouraged the awardees to “kick your way through the vast ocean” in reaching for their dreams, as one of the first Japanese exchange students was advised by his father before heading to the U.S. In closing, Co-Chair of the Scholarship Committee, Mr. Satoru Murase, expressed gratitude to all the guests, donors, staff and volunteers who made the event possible.

Ten students entering college this fall were awarded a combined total of $52,000 in scholarships and two All Nippon Airways roundtrip tickets to Japan. The Honjo Scholarship Award provided a total of $30,000 to five graduate students. Elisa Joyce Taylor, on behalf of the high school awardees and Nanase Shirokawa, on behalf of the graduate student awardees, expressed their gratitude to the JAA community. Congratulations to all of the scholarship awardees! 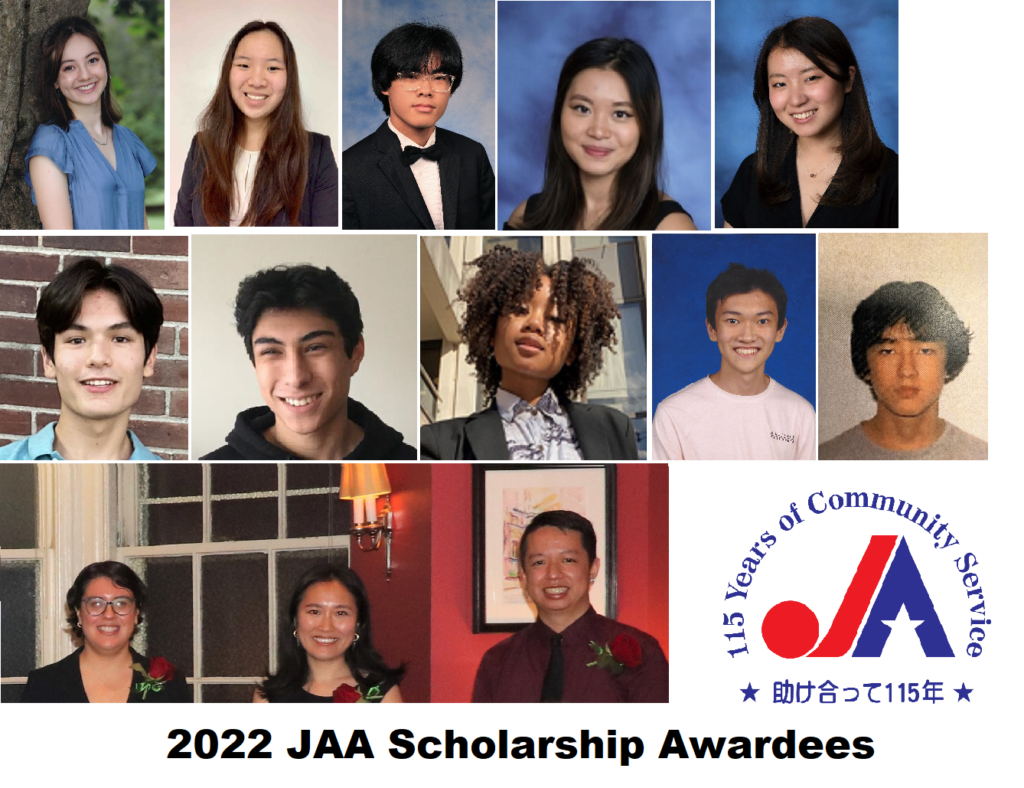 Amb. Mori (middle on the left photo) and Minbuza

Ryukyu (left) and JAA Chorus (All Photos by George Hirose)

On April 30, a beautiful sunny day when the Yae cherry blossoms were in full bloom, the 17th Sakura Festival was held at Flushing Meadows-Corona Park, co-sponsored by JAA and the New York City Parks Department. Starting with the dynamic and powerful performance by Soh Daiko on Japanese taiko drums, the audience enjoyed performances by the JAA chorus under the direction of Motomi Tanaka, the Okinawa Club in New York (Ryukyu dance and singing) and the folk dance and Hanagasa Ondo Parade of the Minbuza/Japanese Folk Dance Institute (presided over by Momo Suzuki). Guest speakers included Ambassador Mikio Mori, Consul General of Japan in New York, and Mr. Anthony Sama, Commander of Flushing Meadows-Corona Park. The presence of Mrs. Chieko Inagaki, who supports this event every year, was missed this year. A cherry tree was planted in commemoration of the 30th anniversary of the Japanese Folk Dance Institute. A cherry tree was also planted to express our gratitude to the staff of Flushing Meadows- Corona Park for taking great care of the cherry trees for the past 20 years and in particular during COVID. 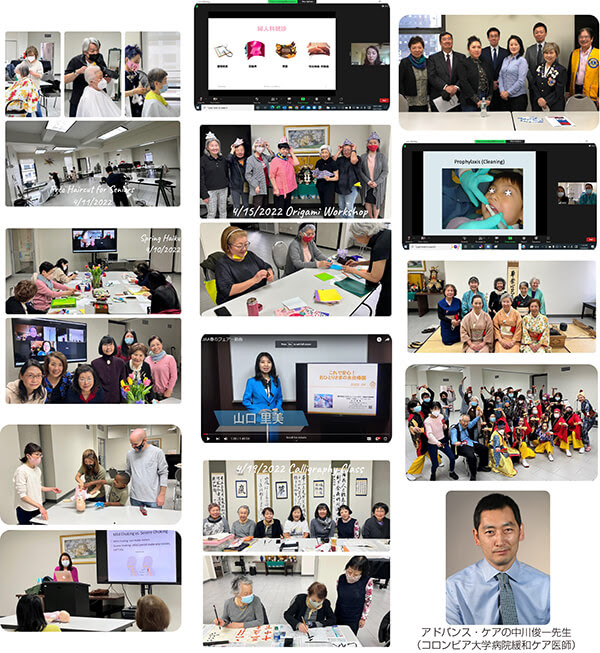 From April 9th to May 8th, the 14th Sakura Health Fair was held for all ages with 1,729 people participating in 50 hybrid programs. Takeshi Furumoto’s story on “the 80th anniversary of the Japanese American internment camp” on YouTube on April 9th received a great response. There were also an origami workshop by Origami Therapy Association, emotional and physical health guidance, children’s medical (dental & eye) and CPR workshop by Sukusuku kai, Palliative advance Care by Japanese SHARE and safety information from the Consulate General of Japan in New York. This fair was sponsored by the JAA Committee on Aging Issues, JAMSNET, the Mitsui Foundation and the Japanese Medical Society of America (“JMSA”), with support from the Consulate General of Japan in New York. 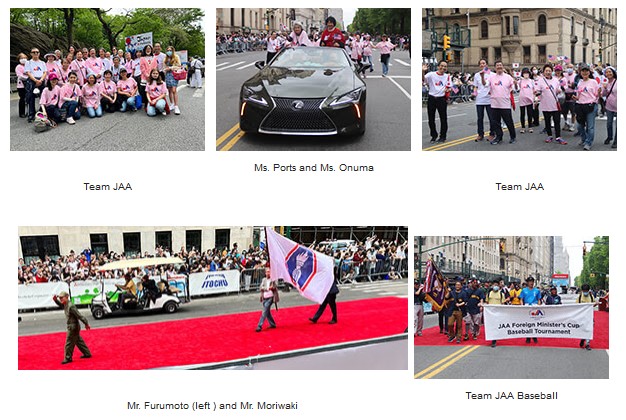 On Saturday, May 14, JAA took part in the first Japan Parade! We were honored to be a part of this amazing community event. In addition to 30 members walking with us as JAA (we all wore T-shirts with the pink and white JAA logo), a group of baseball players representing the teams of the JAA Foreign Minister’s Cup Baseball Tournament marched. Veteran Tak Furumoto marched with former JAA President Gary Moriwaki, who carried the Go For Broke flag. It was a great day for the Japanese and Japanese American community in New York! And the threatened rain held off just long enough … 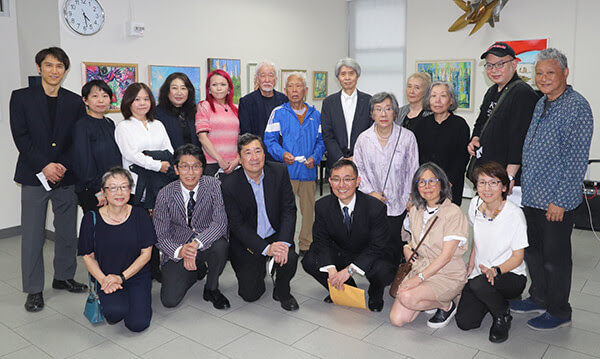 This year’s Art Exhibition was held at JAA Hall from May 12 to 21, 2022. This annual exhibition was started in 1996 with the participation of 26 artists, of whom eight artists (Ushio Shinohara, Hiromitsu Morimoto, Masaaki Noda, Masaaki Sato, Shunji Sakuyama, Kenjiro Sasaki, Junko Yoda, and Toshihisa Yoda ) continue to exhibit their artwork each year. This year, Mariko Kuzumi, Hiroko Ohno, Miki Rokuroda, and Rihomi Sato were newly added, bringing the total to 30 artists who exhibited 58 works of art. The opening reception on May 12th included a welcome by Mr. Koji Sato, JAA President and a greeting from Deputy Consul Kenju Murakami, Director of Japan Information Center. More than 100 mask wearing participants filled the hall as they came to meet the artists and admire their work. JAA is deeply grateful to the Consulate General of Japan in New York, which has been supporting this event since its first exhibition. 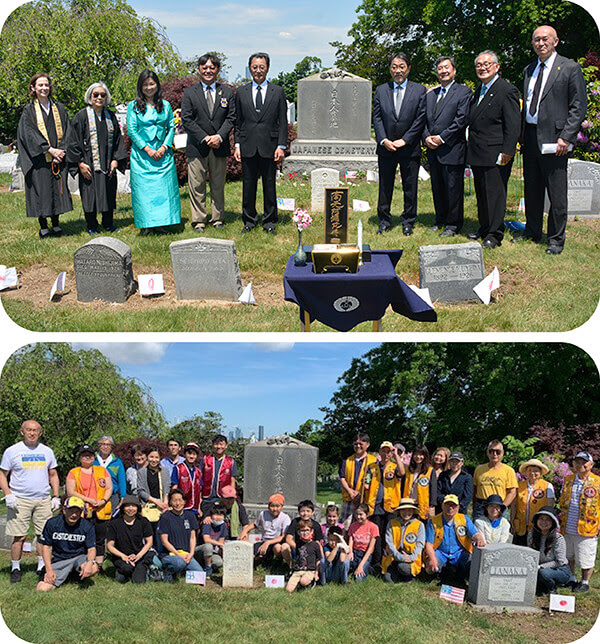 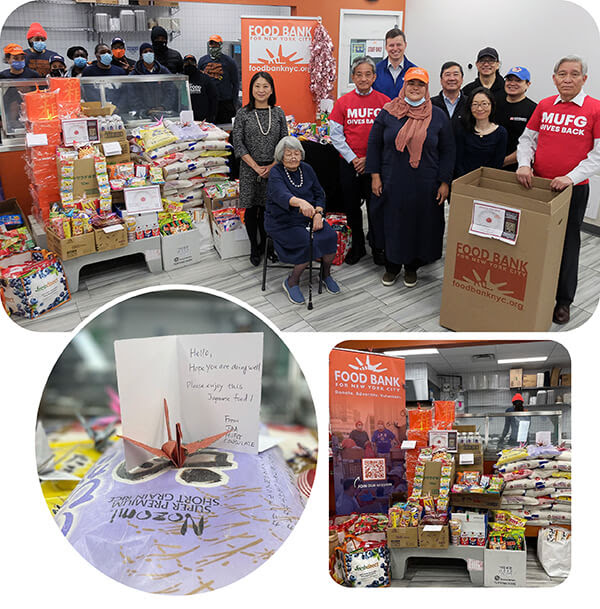 To commemorate 3.11, we were able to contribute over $8,400 worth of food, drink and supplies to Food Bank from the Japan-related community. This food drive was organized by JAA and the Consulate General of Japan in New York and were greatly appreciated by the staff of Food Bank. Ms. Natsuko Oku (Deputy Director, Japan Information Center, Consulate General of Japan), Mr. Kazuo Koshi (Managing Executive Officer, MUFG Bank, Ltd.), Dr. Joshua W. Walker (President, Japan Society), Mr. Koji Sato (President, JAA), Ms. Suki Ports (JAA), Yuki Kaneshige (JAA) and Gary Moriwaki (JAA) were in attendance at the ceremony on March 11th. These donations were given out from their food pantry that week and the 700 pounds of Japanese rice (half of which was from Tohoku) were used for hot meals.

The 36th JAA Foreign Minister’s Cup Soft Baseball Tournament kicked off on Sunday, May 1st. The games are played on Sunday mornings at Central Park North Meadows and Randall’s Island. This year, 13 teams entered, and league and exchange matches were held on July 1, and the top eight teams from each of the A and B blocks will advance to the playoffs (final tournament in August).

The spring Japanese language workshop was held on April 2 via Zoom and was attended by 40 people, including participants from Japan. Professor Yasuo Shimizu of Doshisha University gave a lecture titled “The Present, Issues, and Possibilities of Proverbial Education in Japanese Language Education, and Future Prospects.” Proverbs tend not to be widely used in Japanese language education, but there are sounds and rhythms, reflecting the culture of the country, and it was a good opportunity to reconsider using of the proverbs as a teaching tool. Professor Nakajima from Korea introduced the app, and from Japan there was also participation by Professor Yamaguchi, the author of the “Comparative Dictionary of World Proverbs”. It was a good workshop to deepen understanding of proverbs and explore new Japanese language teaching methods.

We are accepting applications for programs
for the Autumn Health Fair 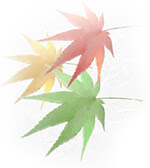 The 17th Autumn Health Fair will be held from Saturday, September 10 to Sunday, October 2 at JAA Hall and online. Under the theme of “To Live a Healthy and Secure Life in New York”, we plan to hold programs on a variety of topics that can be enjoyed by children and adults alike such as pensions, wills, nursing care, dementia prevention and exercises, calligraphy and flower arranging. Please send your program application to the JAA office. 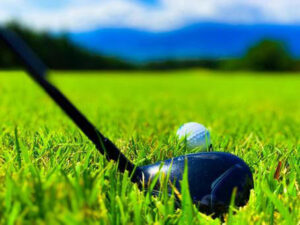 This year’s Tournament will be held on Monday, September 26 at the Harbor Links Golf Course in North Hempstead New York. All Nippon Airways Business Class New York – Tokyo round-trip air tickets and other luxury prizes will be won. The participation fee is $260 (including $100 tax deduction). 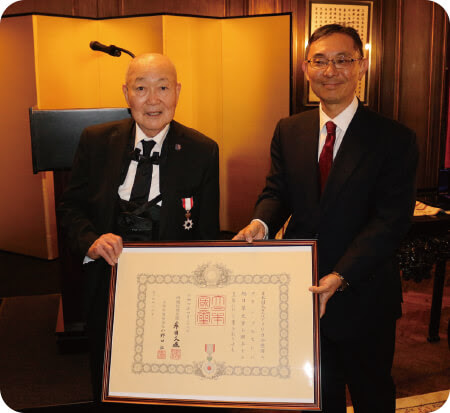 Mr. Takeshi “Tak” Furumoto received “the Order of the Rising Sun, Silver Rays” at the conferment ceremony held on June 28th at the residence of Ambassador Mikio Mori. Since serving the US Military during the Vietnam War, Takeshi Furumoto has been engaged in various efforts for the betterment of Japanese & Japanese-American lives. Through his various activities as Honorary Chairman of New York Hiroshima-Kai and as a human rights activist, he has contributed to promotion of the status of the Japanese-American community in New York & New Jersey, as well as to the promotion of mutual understanding and friendship between Japan & the United States.

JAA Chorus director, Ms. Motomi Tanaka moved to Boston. JAA thanks Motomi for her past dedicated service to JAA and wish her a wonderful happy new life in Boston.

On April 14 and 28, we held Keirokai as part of the 14th Sakura Health Fair. On the 14th, we enjoyed a performance by Rino Aise (vocal & Sanshin) and Tomoya Ogawa (guitarist), and on the 28th, there was a performance by IWAKI Band and a talk on COVID 19 Booster by Dr. Yuzuru Anzai. There were Keirokai in May and June with Japanese songs with IWAKI Band. Many thanks to Mr. Iwaki and the band members!

In Memoriam We are sad to note the loss of the following people from our community: 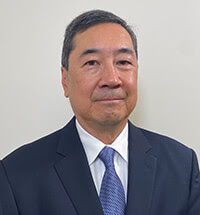 Koji Sato was born on September 5, 1959 in Manhattan, New York, where his parents had moved from Japan only the year prior. His father had initially moved to the US in the early 1950s to attend college in California after graduating from Chuo University in Japan and working at the Tokyo Metropolitan Government. He went back to Japan to undergo the matchmaking process, where he met Koji’s mother. Upon returning to the US, Koji’s father eventually expanded his gift shop business to include seven different locations.

Koji lived in Manhattan until he was five, when his family moved to Westchester. Nine years after that, they moved again to Tarrytown, where Koji attended Hackley School. Although he doesn’t remember there being a strong Japanese community in the area where he grew up, his mother always emphasized the importance of Japanese language and culture. Growing up, Koji spoke only Japanese at home, and his mother sent him to Japanese school on weekends. At the time, he was envious of his friends who spent their weekends watching Saturday cartoons and playing baseball outside. Now, though, he credits his mother and Japanese school for the language skills that he has maintained to this day.

From fourth grade through middle school, Koji spent the summers staying with his mother’s family in Japan. Since their semesters went until July, he would also attend school in Japan for the months that he was there. Unlike the US, where custodial staff clean up after students, Koji and his classmates would take shifts serving one another meals and cleaning up classrooms and bathrooms. He says that this taught him important lessons about responsibility and respect.

Koji attended Colgate University and then New York Law School. Koji always knew that he wanted to work with Japanese corporations and companies, so after graduating from law school, he moved to Tokyo to work as a foreign legal consultant for Hashidate Law Office, a Tokyo affiliate of Kelley Drye & Warren. The international law firm deals with major Japanese corporations who do international business with countries like the US. Koji stayed in Japan from 1986 to 1990, during which time both of his children were born. In 1990, Koji, his wife, and his two kids returned to New York, where they have stayed since then. Eventually, Koji went in-house for Orient Corporation of America, where he became their general counsel and handled all of their legal matters. Currently, he is the Senior Vice President and General Counsel of Orient Corporation, where he oversees all of US operations.

Koji also currently serves as the President of JAANY, following in the footsteps of his father, Noboru Sato (1989-1990). Although he heard bits and pieces about JAANY while his father was president, his first real experience with the organization was when he emceed for the New York region’s Miss Nikkei pageant in his early 20s. In 2004, he became a Board member of JAANY, and was elected Vice President in 2009. Among other mentors, he credits his father, Francis Sogi, and Susan Onuma for bringing him to JAANY. The three, among whom all are former presidents, and two of whom were mentors to him at Kelley Drye & Warren, greatly influenced Koji’s involvement with the organization.

Today, in addition to his positions at Orient Corporation and JAANY, Koji is now a grandfather to a beautiful granddaughter and grandson. He visits them as often as he can.